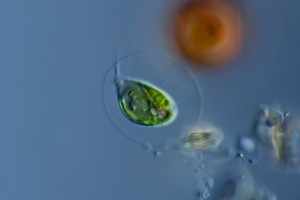 It’s certainly not every day that 26-year-olds co-author publications in renowned scientific journals. Four Bachelor’s students from FAU have achieved this with the help of unusually strong commitment, a good opportunity, intensive supervision and easy means of interdisciplinary co-operation. When Rudolf Borchardt, Simon Scheiner, Peter Schweizer and Benjamin Seemann started their Master’s studies in materials science, they had already made valuable contributions to an article in Nature Communications¹ on improving methods for growing algae in reactors. Prof. Dr. Lothar Wondraczek was the main author of the publication.

‘Algae are useful in many ways. They can break down carbon dioxide, produce biomass as an energy source, and provide raw materials for cosmetic products and medicine. Unfortunately, growing algae is still time-consuming and cost-intensive.’ Prof. Wondraczek, who taught at FAU’s Department of Materials Science (Glass and Ceramics) until 2012 and who now works at the University of Jena, intends to speed up growth in bioreactors by providing more usable light for photosynthesis.

With much support from various directions, Xia Qi already published his doctoral thesis exploring if spinach rewards such special treatment. The results were positive and showed a need for more research in this vein. FAU’s Department of Materials for Electronics and Energy Technology, led by Prof. Dr. Christoph Brabec, also became involved.

However, students who could take care of the details were still needed. At an information event on final papers for Bachelor’s students, the right partners found each other. ‘We’d known each other since the first semester,’ says Peter Schweizer of himself and his fellow students. In 2011, shortly before the end of that chapter of their studies, an opportunity for team work was just the right thing. The division into individual topics – reactors, breeding algae, phosphors, quantum absorption theory – only became important when the written work was to be delivered. Up until that point, the students worked together.

‘The Fantastic Four,’ Dr. Miroslav Batentschuk calls ‘his’ team with visible pride. PD Dr. Batentschuk of Prof. Brabec’s department was a member of the rather sizeable circle of supporters. Sebastian Kolikowski, then a doctoral candidate, was the team’s go-to person throughout everything. Dr. Barbara Klein contributed expertise in bioprocess engineering and Dr. Peter Richter provided answers in cell biology: which type of algae would fulfil all requirements – flexible, robust, low-maintenance and prolific? An invaluable source of help was found outside the realm of science: Peter Reinhardt, master technician at the Department of Materials Science (Glass and Ceramics), built the reactor.

Red reflections from the green gap

A test bioreactor doesn’t take up a lot of space: three centimetres width between panes of glass, the most suitable material, or transparent synthetics. ‘They’re cheaper, and they were good enough for our purposes,’ says Rudolf Borchardt. The light, which green algae can use just like plants, falls into the reactor from the front. ‘The nice thing about it is that this corresponds exactly to the way things are in nature,’ says a pleased Dr. Batentschuk. But there is a clever trick to the set-up: phosphor is applied to the back. ‘It reflects the radiation, meaning it sends it through the reactor a second time,’ explains Benjamin Seemann. Aluminium foil prevents the rays from escaping.

The same light a second time – doesn’t that mean it’s ‘exhausted’ and the energy it contained is used up? Not entirely, as only the wavelengths in the red and blue spectrum stimulate the pigment chlorophyll; the green portion remains unused. Experts call this the ‘green gap’. However, light waves are alterable. This requires another pigment, this time a luminescent substance that captures the green light and reflects it red, like a surface covered in tiny crystal facets. Red light covers the energy requirements of green algae especially well.

A 36-percent increase in growth, 18 percent more oxygen: judging by the algae’s reaction, the measures are a full success. Haematococcus pluvialis, known as ‘blood rain alga’ in German, derives its name from the colour of its resting spores. The bright red circles look splendid, but they are a sign that the alga is not healthy; it covers itself for protection. Green colour, however, is a sign of lively activity.

Meanwhile, the team of four has disbanded. Three of them decided to spend some time abroad while the fourth started his Master’s degree immediately. Instead of the words ‘algae breeding’, Simon Scheiner now uses terms like ‘self-organised monolayers’ with familiar ease. Prof. Wondraczek is continuing the research into the efficiency of photosynthesis in reactors at the Institute of Material Science and Material Technology in Jena. He is convinced: ‘We can still learn a lot from the way sunlight is used in nature.’