‘Physical quantities are nothing more than quantitative metaphors’

‘Physical quantities are nothing more than quantitative metaphors’

Theoretical physicist Klaus Mecke explains to what extent we must rely on linguistic inventions when trying to make natural phenomena comprehensible.

Literature can present the relevance and diversity of physics in an excellent manner.

I have been interested in how my subject, physics, is reflected in literature for a long time. Over the years, I have created an annotated bibliography on the topic and even held lectures about it. People always ask me what I get out of studying literature as a physicist. For many years, my answer was ‘nothing really’. Physics is mainly concerned with experiments and mathematical models. Fiction has nothing to do with it.

However, this changed when we began an intensive interdisciplinary discussion between literature and physics here in Erlangen four years ago. This included interviews with writers, which will be published soon. One of our interviews was with the Austrian poet and novelist Raoul Schrott. He asked me how I approach metaphors as a physicist. This led me to look the topic of metaphors in physics in more depth.

Today it is common sense that metaphors are not only a form of literary expression but also help us to understand things. A well known example is that of the great chemist August Kekulé, who is said to have had a dream about a snake biting its tail which gave him the idea of what the atomic structure of benzene might look like, the discovery which made him famous.

I believe, however, that metaphors play a role in the natural sciences and in physics in particular on a much more fundamental level. On closer inspection many physical quantities are nothing more than quantitative metaphors. For example, we are now used to the idea of electromagnetic fields. These ‘fields’ were invented by physics in the 19th century. In his laboratory notes the experimental physicist Michael Faraday who made this discovery wrestles with the problem of what language to use to describe what he has observed and what kind of further experiments are necessary in order to pin down his observations. It was not until he had found specific measuring procedures which enabled him to grasp what he described with his chosen metaphor ‘field’ in a quantitative way – a scale off which the concentration of iron filings can be read – that a new physical object, the electromagnetic field, came into existence. Incidentally, I believe that these processes, which we can trace through science’s history, are the most honourable tasks of all in physics: expanding our realms of perception and discovering the diversity of natural phenomena.

But let us continue. Particularly in an exploratory phase in physics when someone introduces a new quantity, it becomes clear that it is less about discovering something new and much more about creating a new metaphor. We know what a ‘field’ is from our everyday experiences and can transfer this metaphorically to the phenomena of electromagnetism. However, it is crucial here that we endeavour to ensure that this remains independent of context. Physicists aim to name all possible conditions that affect a phenomenon very explicitly to ensure that the required experiment that leads to the production or observation of a phenomenon can be reproduced in other contexts. In order to do this we need measured quantities or scales – the equality of the measured values indicates whether the attempt to find phenomena that are independent of context has been successful. 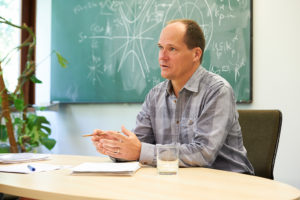 However, there is another reason why transferring metaphors to values is significant in physics. To take an example, Georg Simon Ohm – born in Erlangen – discovered that current and voltage are related. The reason that no one was able to see this before is that current and voltage are different measurement narratives, the outcomes of which are dependent on the details of the experiment. All Ohm did was change the standard experiment design by using a thermocouple instead of a voltaic pile as a voltage source. As a consequence, he was immediately able to see that there was a simple proportional relationship between current and voltage. He did not even need a mathematical model to see that current is voltage. This example clearly shows how measurement scales not only enable observations to be objective but also allow one quantity or concept to be transferred to another. For this transfer to take place, the values must be equal. Einstein would never have been able to explain that energy resembles a curve without equal values – the values of inertial and gravitational mass. In our immediate experience these two concepts are simply too far apart to unify them.

Neither things nor properties

But that is not the end of the story. What we can see so clearly using the electromagnetic field example in fact applies to all physical quantities. Temperature is also essentially defined by a measurement narrative: temperature is what we measure with a thermometer. Of course, some textbooks on physics say otherwise. According to the definitions given in these books, temperature is kinetic energy. For example, statistical physics can show that for an ideal gas the temperature is essentially proportional to the kinetic energy contained in the individual gas particles. However, this definition already contains a whole range of modelling assumptions about material. I question why all of these assumptions are necessary in order to define what temperature is. After all, from a historical point of view, the term existed as a physical quantity long before any notion of atoms in gases or liquids and kinetic energy. The term ‘temperature’ is entirely independent of this.

The more general point that I would like to make can be demonstrated very nicely using the example of the scientific history of light. Light, by the way, is often talked of in superlatives. It is the oldest phenomena that we can measure as cosmic background radiation. It is the only object without mass. Through light we learn about the most far away things, but also about the oldest – just think of the light of long-dead stars. What is light? In the 17th century, Newton understood light as the movement of particles – corpuscles – similar to balls that moved through the air in a straight line at a certain speed. It was possible to describe the phenomenon of refracting light very well using this theory. However, phenomena such as the blurred edges of shadows or interference in beams of light in the famous double-slit experiment were more difficult to explain. In this experiment light is shone through two slits that are next to each other. However, on the observing screen that the beams of light are projected onto, what is observed is not two separate lines of light but a pattern of lines. The explanation for this effect is that light behaves like waves on the surface of water that sometimes strengthen one another and sometimes cancel one another out. For this reason, the theory of light as a wave was also developed in the 17th century by physicists such as Robert Hook and Christiaan Huygens. With Faraday’s discoveries and the introduction of the concept of the electromagnetic field, scientists were able to recognise what oscillates in light: not water but electromagnetic fields.

The dominant theory changed once again with the discovery of quantum effects. It was suddenly possible for the corpuscular properties of light that Newton and his contemporaries had predicted in their models to be measured! Researchers were suddenly able to observe corpuscular phenomena! This could be done, for example, by shining light onto a piece of metal and measuring the electrons that were knocked out of it by the light. This is called the photoelectric effect. It was on the basis of this effect that Einstein concluded that light was a particle. However, at the same time, the wave model was still required to explain the interference effect shown in the double-slit experiment. Einstein created a new metaphor for the fact that light behaves like both a particle and a wave. Light is a ‘quantum’ – a limited, spatially localised quantity, the further form of which is, however, defined by the properties of waves.

Quantum theory made it clear that, to a certain extent, what we see as material reality – a world of things with their own properties – is fiction, a model narrative. It is something that we create with our terms but that is not laid out as such in nature. The debate surrounding light and particles also shows us how difficult it is to use language to visualise a physical world that does not consist of things and their properties, but of physical quantities that are neither things nor properties. As we try to make this comprehensible we are inevitably forced to use metaphors.

Seeing the world as a narrated experience of nature

The way I see it, there is more than just a subtle difference between whether we understand the world as a narrated experience of nature, as is suggested by quantum theory, or whether, as is usually the case, we assume that the world consists of things and properties. To understand physics as a speech act allows objective natural laws to be united with the phenomena of freedom of speech and action, and with historicity and cultural phenomena. Natural laws simply provide a framework for what happens and therefore only determine how something happens if it happens. Everything else – whether something happens but also what causes it to happen – is left open.

A determinist who maintains that all events are predetermined by the laws of physics believes that if we knew the starting co-ordinates of all point particles that the world is made of then we would be able to predict how they would interact with one another. The fact that we are unable to make such predictions in practice is due only to the fact that the world is so incredibly complex that we cannot determine the co-ordinates of all the particles in even a tiny part of it. However, this limitation that is imposed on us does not change the fact that the future state of the world has already been determined by the starting co-ordinates.

I find this form of determinism problematic because it transfers the mathematical concept of a world that consists of point particles back to nature. By doing so the mathematical objects of physics suddenly become things in the real world – as happened, for example, with the popular understanding of string theory. As of yet, no one has actually been able to observe ‘strings’, and whether it is sensible to assume the existence of strings is the subject of great debate. One way or another, in reality, terms like ‘strings’ and ‘point particles’ are are only metaphors which help us to get closer to natural phenomena.

This article was originally published in our research magazine friedrich in an issue which is all about light. Find out what light is, where it comes from, why we see it and what it does to us in friedrich no. 114. (German)