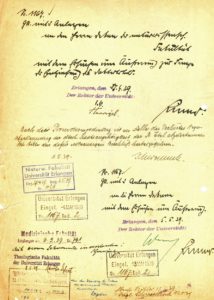 Politically-motivated injustice and ideological fanaticism were also rife in doctoral procedures during the National Socialist era. As was the case in several other universities, many doctoral graduates who had rightfully obtained their degrees were stripped of their titles at the University of Erlangen – an act that was previously only known in cases of plagiarism in doctoral procedures.

In most cases after the National Socialists came to power, doctorates were revoked due to the loss of German citizenship, which was imposed by the Nazi regime on those who had fled Germany for political reasons, increasingly members of the Jewish faith.

In other cases, doctorates were revoked due to a conviction of a criminal offense, whereby politically or ideologically motivated crimes such as treason or so-called racial defilement were also defined during the Nazi era as criminal acts and the penalties for previously punishable crimes such as abortion had been considerably increased.

All these ideologically motivated revocations disregarded the scientific achievements of the doctoral graduates, expelled them from the academic community on the basis of an administrative act that was given the appearance of legality and destroyed their professional prospects. Current research indicates, with the exception of a very small number of cases, that over 160 doctoral graduates were stripped of their titles on ideological or political grounds.

The Faculty of Humanities, Social Sciences, and Theology, which comprised two faculties at the time, was the first to investigate these unjust acts, initiating a prize in memory of the revocations at the Faculty in 1999 called the Lilli Bechmann-Rahn Prize in memory of the Jewish scholar of German language and literature who completed her doctoral degree on February 17, 1934. The Faculty of Medicine and Faculty of Law followed with acts of remembrance and two comprehensive volumes of biographical articles and a final volume documenting the acts of remembrance and the revocations at the Faculty of Theology and the Faculty of Sciences.

Doctoral degree revocations and act of remembrance of the Faculty of Humanities, Social Sciences, and Theology

Doctoral degree revocations at the Faculty of Medicine

Doctoral degree revocations at the Faculty of Law