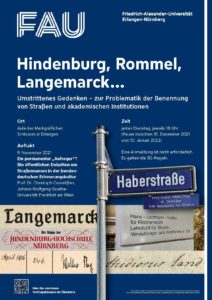 Erwin-Rommel-Strasse, Haberstrasse, Hans-Liermann Institute – there are plenty of examples of names given to streets and buildings that are controversial. With this aspect of the culture of remembrance in mind, the Working Group for Memory Culture at FAU has put together a series of public lectures titled “Umstrittenes Gedenken – Zur Problematik der Benennung von Straßen und akademischen Institutionen” – Controversial remembrance: The difficulties of naming streets and academic institutions.

Naming streets after historical figures can often be a source of controversy. This controversy also affects FAU as some of its institutions have addresses with names that have already been the subject of public debate. Other streets and academic institutions, on the other hand, are named after people that feature in FAU’s history that require further investigation. After a short introduction about the situation nationally, FAU researchers presented some examples of names given to streets and locations in Erlangen and Nuremberg in this lecture series. In their lectures, the researchers discussed processes in the culture of remembrance, revealed areas that cause problems and showed examples of how to deal with questionable street names.

Prof. Dr. Christoph Cornelißen from Johann Wolfgang Goethe-Universität Frankfurt am Main started the series with a lecture about the repeated debate about controversial street names in Germany and the link to the culture of remembrance. In further lectures, FAU experts examined locations and their historically important events and name givers such as Walter Flex or the Langemarck myth. How military remembrance is expressed in the public sphere was explained in a lecture about General Erwin Rommel. In addition, a presentation was held about the working group that deals with street names of the Erlangen city archives and its strategies for dealing with controversial street names (“Straßennamen des Stadtarchivs Erlangen und seine Strategie zum Umgang mit umstrittenen Straßennamen”).

All lectures are available on the FAU video portal

Overview of the lectures in the series