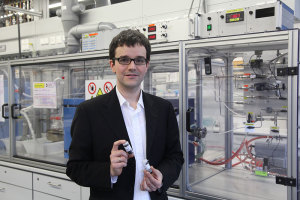 Renewable energy sources – such as hydrogen from wind power – are an important step towards reducing greenhouse gases and protecting our climate. Hydrogen can be produced sustainably using other sources than just wind power: the European research project SusFuelCat aims to improve the process of extracting hydrogen from wet biomass. Prof. Dr. Bastian Etzold, Junior Professor for Catalytic Materials at the Excellence Cluster ‘Engineering of Advanced Materials’ at Friedrich-Alexander-Universität Erlangen-Nürnberg (FAU), is responsible for initiating and co-ordinating the international project. The European Union will fund SusFuelCat from 2013 for a period of four years with 3.5 million euros.

At the moment, hydrogen can only be extracted from biomass (compostable material) using large amounts of energy. For example, wet biomass must be dried intensively before it can be processed. For SusFuelCat, researchers are using Aqueous Phase Reforming (APR) as an alternative to the drying process. In this method, the wet biomass comes into contact with a catalyst. The chemical reactions break down the material and release almost pure hydrogen.

The benefit: the process does not consume much energy and is carried out at low temperatures and low pressure. This means that the energy-intensive drying process is no longer necessary. APR is especially efficient as even the water from the biomass can be broken down to produce hydrogen – which is only possible thanks to the low temperatures. In comparison to fossil fuels, hydrogen does not only save precious energy. Using hydrogen also protects the environment from greenhouse gases, as it only produces steam on combustion rather than CO2.

The key to making the process more efficient are the catalysts. If the researchers can optimise the catalysts, they can increase the sustainability of the entire process. Catalysts used at the moment contain expensive precious metals such as platinum and palladium which are finely distributed on ceramic plates. The SusFuelCat project aims to reduce the amount of precious metals or replace them with other metals without affecting the efficiency of the APR process. Carbon-based materials such as nano tubes or activated carbon could be used as carriers as they promise long-term stability and environmentally-friendly recycling of the metals.

For optimising the catalysts, the researchers are using a combination of diverse state-of-the-art methods: on a molecular level, they are using computer simulations. This allows the catalyst properties to be adjusted precisely. New analysis techniques allow the researchers to monitor the success of the APR process, for example by using spectroscopy to see inside the reactor.
Long-term experiments conducted by industrial partners are also an important part of the optimisation process. In all, six research institutions, one international company and three small and medium-sized enterprises are involved in the project. The industrial partners come from Germany, Finland, Great Britain, the Netherlands, Russia and Spain.

‘The consortium is certain that we can make an important contribution to the energy policy of the European Union by increasing the use of renewable energy sources with this new development,’ says Professor Etzold. ‘Our findings will also have the added benefit of improving catalyst efficiency in related processes.’ 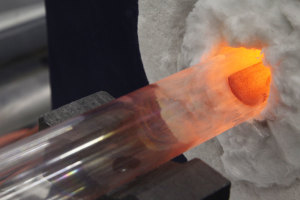 In a horizontal pipe reactor, carbon is separated from its compound with another element (carbide-derived carbon, CDC) (Image: Georg Pöhlein) 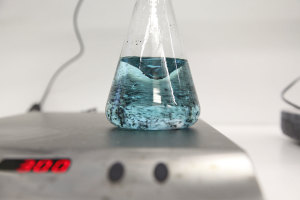 The precursor of a catalyst is produced via the interaction of electrically charged particles by means of wet chemical separation. (Image: Georg Pöhlein)