Cells are undoubtedly the specialists for invisible communication in the smallest of spaces. And it’s not only tumours that make use of this fact – communications engineering has also discovered the advantages of molecular communication.

Whether it’s in the contact between similar or varying cell types, in cooperation or competition, information is transferred between cells extremely quickly and usually very precisely. Understanding such conversations between cells makes it possible to take action when incorrect information or troublemakers cause problems and also to exploit this type of natural communication in technical communication systems.

An uninterrupted stream of messages flows through every functioning organism at an incredible rate. If we could listen to the cells involved, we would hear a babble of voices that is difficult to decipher. Searching for specific pieces of information in the silent interactions between molecules on biochemical signalling pathways is just as challenging. Professor Anja Bosserhoff compares the work being carried out at her Chair of Biochemistry and Molecular Medicine with the task of filtering out the relevant messages from a confusing range of background noises.

As data carriers in intercellular communication, molecules can pass on signals amongst each other until their information reaches the right docking site on the surface of a cell or they become active directly from membrane to membrane. Just like the postal system, you could compare the first case to a courier showing their ID card at the door and in the second case, the message is delivered directly through a gap, such as a letter box. Neighbouring cells in an organ, for example, communicate to each other that they are located in the right place. If one cell cannot prove it is in the right place, it is rejected and destroyed.

Cells quite rightly insist on this level of trustworthiness, as the instructions in every accepted message are carried out. Enzymes pick up these messages and ensure that the code inside the cell is copied, regardless of the consequences. Despite all precautions, it is as difficult to prevent incorrect instructions from being picked up as it is to prevent misuse, as is the case when tumour cells are allowed to become dominant. When they stimulate themselves to grow uncontrollably and thus use up nutrients, their communicative behaviour is similar to that of the other cells. But they don’t follow the rules of equilibrium. 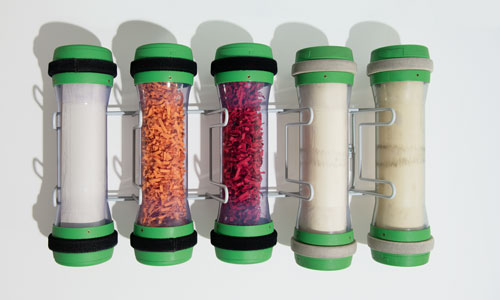 Tumour cells adjust their communicative behaviour to mirror that of the other cells, thereby ensuring that their ‘toxic’ messages are spread throughout the organism. (Image: Thomas Riese)

However, the human body is not defenceless against these experts in deception. Alarm signals triggered by characteristic signs prompt immune cells to bridge the gaps in cell

regulation. ‘Moles remain harmless, although the growth inhibitor of their pigment cells is not effective enough,’ adds Anja Bosserhoff as an example. Damaging cell mutations are by no means rare, but they can usually be repaired. ‘This process can be observed on the surface of the skin, but it usually goes unnoticed inside the body.’ But which signals prevent pigment cells from progressing from accelerated growth to malignant melanoma, which is potentially life threatening? This, like many molecular interactions, still remains a mystery.

When the body’s own repair system fails, chemical active ingredients should prevent accelerated cell division and excessive growth. At first, the malignant melanoma responds to medication and shrinks considerably. However, after several months, it begins to grow again at a faster rate. ‘This is a type of evolution in skin cancer cells,’ explains Prof. Bosserhoff. ‘Most respond to the external stop signals, but some remain oblivious giving them the opportunity to displace the other cells. During treatment, the resistant cells in the tumour gain the upper hand and multiply even faster.’ In these resistant cells, the information carrier that triggers the growth-promoting protein KRAS does not have enough microRNA. These molecules contain the command to stop production of the protein in good time. This protective mechanism is also missing in liver cancer cells. Current treatment options are unable to stop them.

After discovering this communication deficiency, the research groups of Prof. Dr. Anja Bosserhoff, Dr. Peter Dietrich and Prof. Dr. Claus Hellerbrand at the Institute of Biochemistry found new approaches to therapy, which involve re-implanting the protective mechanism into tumour cells by using gene therapy, directly deactivating the uninhibited KRAS protein, or administering special medication. ‘Types of cancer that were previously fatal could be better treated to increase quality of life,’ predicts Anja Bosserhoff.

Irrespective of which messages are sent to or received by cells – molecules and, in some cases, smaller particles have proven to be ideal intermediaries on the nano and micro scale. Taking nature as a model, signals in this magnitude range could be transmitted if powerful control systems for new approaches in biology, nanotechnology and medicine are required, for example to monitor the bloodstream or to monitor a drinking water plant using miniature robots. A completely new area of research in communications engineering is currently being established for developing synthetic molecular communication systems that include the elements of data transport between cells – molecular communication.

Should cells be directly integrated in synthetic systems or should we imitate their communication mechanisms? ‘Both,’ says Prof. Dr. Robert Schober. As Chair of Digital Communications, he coordinates the ‘Molecular Communication Systems’ project as part of the Emerging Fields Initiative (EFI) at FAU. Here, scientists from the fields of electrical engineering, biology, nanomedicine, materials science and mathematics are conducting research into communication in the smallest of spaces. Electromagnetic waves are not suitable for nano- and micro-sized systems, as Prof. Schober explains. Even if it were possible to reduce antennas to the relevant size, the susceptibility to errors, the energy required and the extremely high frequencies involved would make it infeasible. However, such size ranges are a natural feature of signal molecules.

The scientists involved are facing extremely complex tasks. The transmitters, information carriers and receivers must form a reliable and controllable unit. The chemical composition and shape of messenger molecules are just as important as their concentration and the time at which they are released. The information carriers could be added to freely diffuse in liquids or transported through the membranes of adjacent cells. They could also travel through tiny tubes to their recipients or be used in a targeted manner to communicate with a nanomotor within a bacterial cell. A simple scenario controls the flow of information in which molecules or particles reach or do not reach the receiver, similarly to how the code ‘zero’ or ‘one’ represents ‘no current’ or ‘current’ respectively.

‘Molecular Communication Systems’ is receiving funding from FAU’s Emerging Fields Initiative (EFI). With EFI, FAU supports innovative ideas, which often span different fields of research. Such unusual and sometimes risky ideas push the boundaries of research, which means regular funding is not always an option for these projects. EFI thus aims to promote outstanding, preferably interdisciplinary research projects at an early stage and in a flexible and non-bureaucratic way. Nine professorships and chairs from the Faculty of Sciences and the Faculty of Engineering are involved in the ‘Molecular Communication Systems’ project. Further information is available at: project-homepage.

The development of synthetic molecular communication systems is based on theoretical models. By using these as a starting point, the researchers then design suitable communication processes that minimise transmission errors. Different parameters are tested using experimental platforms known as testbeds. At the Microbiology lab led by Prof. Dr. Andreas Burkovski, doctoral candidate Laura Grebenstein is investigating coli bacteria that emit protons when they are exposed to light. Escherichia coli is not able to convert optical signals into chemical signals. The protein responsible for this is found in bacteria that photosynthesise without chlorophyll. If E. coli bacteria are modified in such a way that they produce this protein, the chemical energy remains trapped between an inner and outer membrane. The latter must be removed using ultrasound as only then does E. coli become a proton pump. The message is coded in light signals by a computer which controls an LED at the optimum wavelength. ‘We have discovered that 10 to 15 seconds of exposure to light delivers the best results,’ says Laura Grebenstein. ‘The cells can regenerate in a rest interval of 30 seconds.’ The pH value of bacteria in an aqueous solution, which indicates whether the solution is acidic or alkaline, changes when protons are emitted. A sensor measures the change, so that the received chemical signal can be read by another computer. This could enable, for example, texts to be transmitted from one computer to another. In a second testbed, managed by nanomedicine specialist Prof. Dr. Christoph Alexiou, magnetic nanoparticles are used that were originally designed to transport active ingredients to tumours. As carriers of information, they are pumped into a tube and kept in motion in an aqueous solution using a second electronic pump. If the magnetic particles cross the in-built receiver, they pass through a coil and trigger electrical signals that are proportional to the concentration that can be interpreted using mathematics.

Gertraud Pickel studied sociology and history, but later developed a preference for science, technology and medicine. After completing an internship at a daily newspaper, she started work as a freelance journalist and editor, and spent many years at the FAU Press Office. She has returned to freelance work since retiring.