A fascination with intelligent machines and their potential has featured in philosophy, literature and cinema for the last 100 years. As early as 1928, Fritz Lang painted a frightening scenario with his silent film ‘Metropolis’: a robot with artificial intelligence is created in order to prevent a revolt among suppressed workers. More recent films such as The Matrix or Ex-Machina deal with humanity’s loss of control and the dangers which may be posed by artificial intelligence (AI).

We are (luckily) nowhere near developing an omniscient machine, but AI has made significant advances in recent years and has gained a foothold in many areas of our day-to-day and working lives, largely without us realising: search engines which learn from our user behaviour, tools for analysing files in legal contexts, voice and image recognition, software for increasing flexibility in production.

A long-standing tradition of AI research 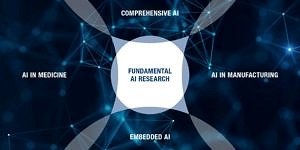 Research on artificial intelligence (AI), pattern recognition and machine learning enjoys a long tradition at FAU. The first Chair of Artificial Intelligence was established in 1975, providing fundamental research on pattern recognition in the areas of computer vision, speech comprehension and medical imaging. In 2017, the Laboratory for Machine Learning and Data Analysis was established. Currently, more than 60 chairs and professors are working on important AI topics, including fundamental mathematics, algorithms, calculations for embedded systems and data security. Research focuses not only on the medical sector, the manufacturing industry or digital humanities, it also deals with over-arching issues such as the ethical aspects of AI. True to the FAU motto ‘Knowledge in Motion’, FAU is driving research in numerous collaborations with excellent research institutes and reputable industry partners, focusing on fundamental research into AI and the four clusters ‘comprehensive AI’, ‘AI in medicine’, ‘AI in manufacturing’ and ‘embedded AI’. The website www.ai.fau.digital gives an overview of AI research at FAU.

In spite of the many opportunities offered by artificial intelligence, a certain measure of trepidation remains, for example a fear that jobs may be lost. A recent study has concluded that even today, computers and robots would be capable of completing the tasks of 15 percent of all professions. Sabine Pfeiffer takes these figures with a pinch of salt. ‘Working processes can only be automated if they can be described accurately and well. Statistics such as these usually differentiate tasks according to what extent they can be classed as routine. However, this is often inaccurate. Sabine Pfeiffer is a professor of Sociology (Technology – Work – Society) at FAU and her research focuses on how digital transformation and industry 4.0 are changing the world of work. She has approached car manufacturers and mechanical engineers, software developers and the telecommunications sector. Her qualitative surveys have revealed that a number of tasks are not actually as routine in nature as is commonly assumed. ‘A plant operator, for example, who is responsible for monitoring eight robots has to intervene up to 30 times in a typical shift in order to ensure production continues to run smoothly.’

According to Pfeiffer, two important aspects are neglected in the discussion about the use of AI in industry. First of all, data-intensive processes are already covered by IT technology – real-time control and embedded systems have been incorporated into production and automobility for a long time now. ‘There is a lot of hype around newer models such as cloud computing and big data, but ideas of where exactly they could bring genuine added value to the production process are still very vague.’ The crucial point is not the data, the point is that processes in the companies would have to be overhauled entirely. A further tricky aspect is the choice of suitable algorithms. Whilst it is true that they are freely available as open source programmes, the statistical model upon which they are based is often not fully understood. Pfeiffer: ‘At the end of the day, it is up to people to decide on the basis of their expert knowledge whether they are dealing with noisy data or genuine operational requirements.’

Secondly, the implicit knowledge of employees is often underestimated. In other words, the knowledge we gain as a result of experience which we often cannot explain rationally and explicitly, but which allows us to take the right decision in unforeseen circumstances. ‘The latest versions of AI are trying to reproduce intuition better and cope with probabilities, but they are not yet able to cope with the complex and many-layered processes typical of the world of work.’ It goes without saying that work processes will be changed as a result of digitalisation, but Sabine Pfeiffer does not share the concern that there will be a massive loss of jobs. ‘In certain restricted domains, AI may be a helpful instrument, but it will not replace people.’ Jobs are much more likely to disappear in coming years for other reasons, such as relocation or economic downturns. 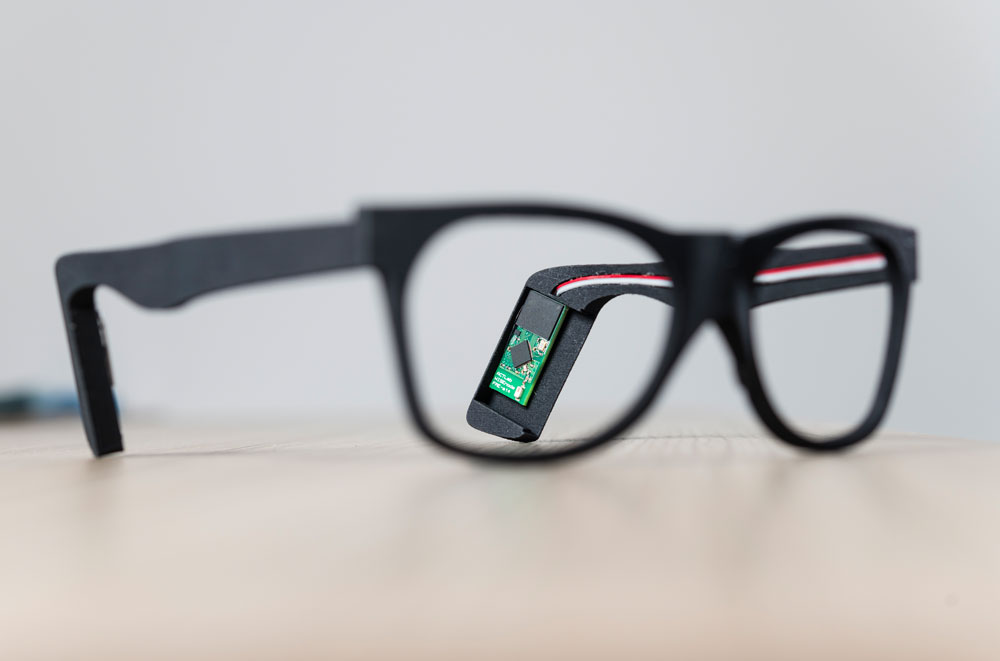 Artificial intelligence offers a wealth of opportunities for the medical sector in particular. Researchers at the Chair of Digital Health at FAU have designed glasses that can measure the wearer’s heartbeat and other vital functions. (Image: Uwe Niklas)

Helpful tools in the medical sector

One of the most important areas in which AI is already being used successfully is the medical sector. Intelligent algorithms, for example, are capable of shifting through and analysing reams of medical publications, with roughly 6000 new articles being published throughout the world every day. The success of AI in analysing medical images has also been impressive: self-learning computers are already more accurate in diagnosing breast or skin cancer than their ‘human colleagues’.

AI is superior to humans when it comes to recognising certain patterns in a flood of information. This feature is also used to compare data from certain biomarkers with our daily habits and to therefore gain information about the state of our health. The latest apps and wristbands can turn the Apple watch, for example, into a device for diagnosing diabetes, cardiac arrhythmias or sleep apnoea. ‘Generally speaking, it is feasible that our health may be monitored outside of doctor’s surgeries and hospitals in future,’ says Prof. Dr. Oliver Amft, Chair of Digital Health at FAU. 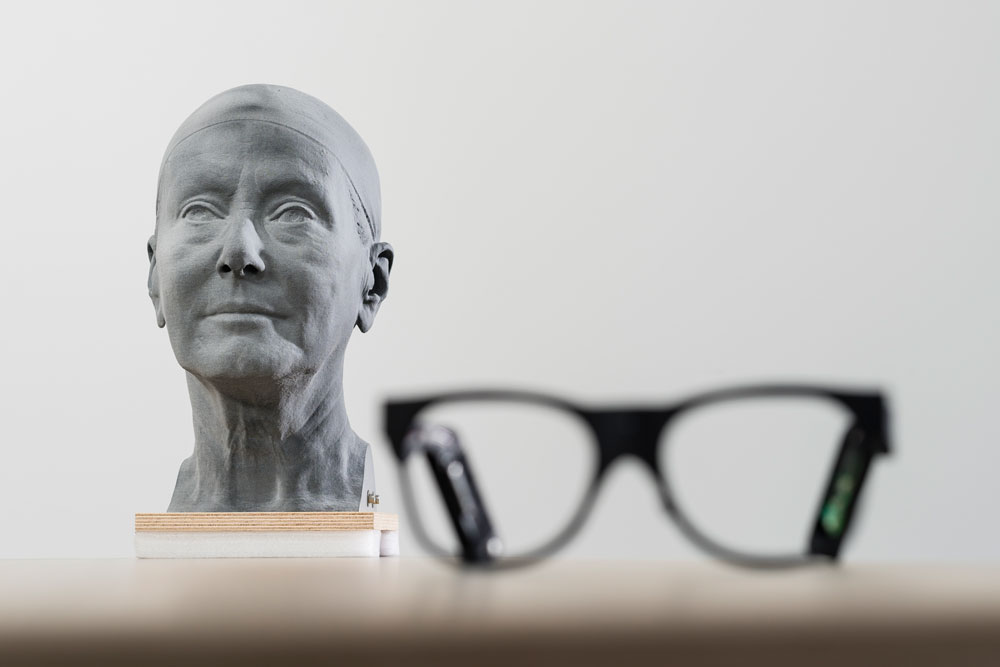 Researchers at the Chair of Digital Health are working on developing personalised AI glasses. They scan the heads of test subjects and then have the glasses made to measure using a 3D printer. (Image: Uwe Niklas)

AI can help us to live more healthily

Amft works with computer algorithms for sensor data analysis and designs wearables, portable mini computers. He has designed eyeglasses which look virtually the same as normal models, but which are capable of recording up to 100 different biomarkers, from heart beat to breathing rhythm to nutrition. ‘The sensors in the temples can measure, for example, muscle contraction and analyse chewing sounds,’ explains Amft. ‘This gives us reliable information about individual eating habits and even about the type of food eaten.’ Using data such as these, the system can derive recommendations for people with diabetes, at the same time as helping doctors monitor and tailor treatment to the individual.

There are no plans for the highly customised eyeglasses to go into mass production any time soon, however. Frames are adjusted to suit the anatomy of each wearer. The head is measured using a scanner to ensure that the sensors sit perfectly against the skin and at the correct position for the wearer’s anatomy. The number of sensors is also adjusted for each specific user, resulting in a set of unique parameters. Researchers have turned to novel production methods in a bid to keep the production costs for these unique, customised products as economical as possible. Instead of traditional injection moulding, the eyeglasses are produced using 3D printing. 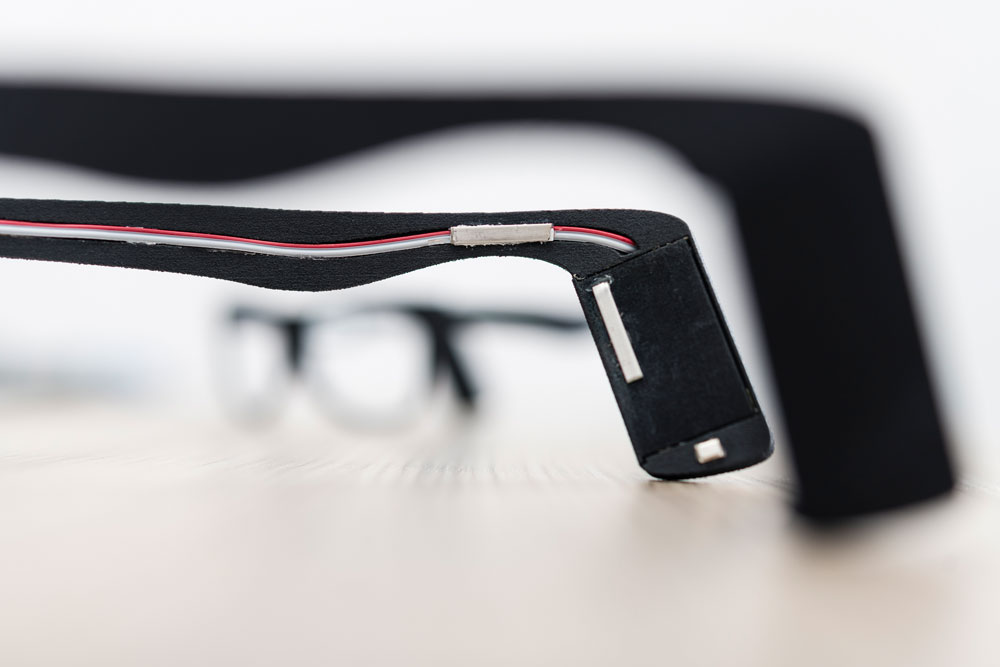 The team is still working on perfecting the glasses. (Image: Uwe Niklas)

Combined with AI algorithms, wearables such as these can deliver data about behaviour and lifestyle which are currently largely ignored in the medical sector. They can help when prescribing and dosing medicines and even decide whether or not a patient has to visit a doctor for routine examinations. This could in turn lead to considerable cost savings in the health sector.

Before AI can be used reliably to help with decision-making in the health sector, researchers will not only be called on to design the appropriate algorithms. ‘One of the major challenges will be to combine data-based models with knowledge-based descriptions from experts,’ says Oliver Amft. ‘And the basis the system uses to make decisions has to be transparent.’