A home for creative minds, keen athletes and nature lovers

FAU’s two main sites, the cities of Erlangen and Nuremberg, are located at the heart of the Nuremberg Metropolitan Region. Both Erlangen, a bicycle-friendly city with 100,000 inhabitants, former home of the Huguenots as well as a key location for Siemens, and Nuremberg, a city with a population of half a million and a metropolitan flair, have their own unique charms. The opera, theatre, cabaret and museums, various sporting and leisure activities along with a lively pub scene and night life, offer plenty of opportunities to relax after a day in the lecture theatre, lab or library. The mixture of academia, innovative companies, art and culture makes the region the perfect place for creative minds, keen athletes and nature lovers. 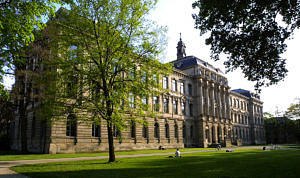 Erlangen is one of the best preserved examples of Baroque city planning in Germany and has an incredibly rich history.

It gained its reputation as a cosmopolitan city in the 17th century when it became a second home to the Huguenots. The atmosphere is as international today as it was back then.

This is partly due to FAU with its students and staff from all over the world, and partly due to the international companies which are based in Erlangen and the surrounding area.

The mixture of people of all ages, both native Franconians and those who have moved to the area, has ensured that the savoir-vivre of the former French immigrants is still present today. 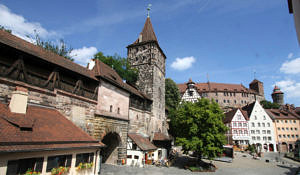 Outside of Bavaria and Germany, the first things people associate with Nuremberg are often the Christmas market and Lebkuchen, the city’s gingerbread-like speciality, followed by the Castle and the old town’s half-timbered houses.

But Nuremberg is also a modern metropolis which has plenty more to offer. Many industrial companies and service providers are located here and it is an international transport hub, trade fair centre and a key location for academic work and research.

Nuremberg is also very conscious of its 950-year history and also recognises the unpleasant side of its past. Visitors to the city see evidence of its importance as a medieval imperial city and trade centre in its Castle, churches and half-timbered houses and of its role during the Third Reich as the location of the Nuremberg Rallies. 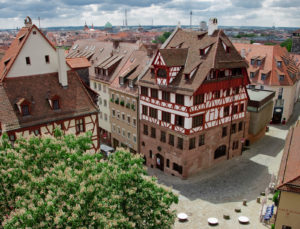 Nuremberg and Erlangen have plenty to offer when it comes to art and culture. There are many museums and a lively music scene featuring everything from the Bardentreffen world music festival and Rock im Park to open air classical concerts by the Nürnberger Philharmoniker orchestra and opera performed by the Nürnberger Staatstheater. There are also numerous events centred around various aspects of culture where you are sure to experience a few surprises and see some unexpected treasures.

Many of the region’s most important museums are located in Nuremberg. One of the most interesting museums is Albrecht Dürer’s house, which gives visitors an insight into the life and work of one of Nuremberg’s most famous citizens. Nuremberg is also home to the Germanisches Nationalmuseum (German National Museum), the largest museum of German art and culture.

Modern art and contemporary design can be found in the Neues Museum (New Museum), a striking modern building which is flooded with light and creates a stunning contrast to the neighbouring Handwerkerhof (craftsman’s yard) and old city wall.

Industrial history is brought to life in the Museum Industriekultur (Museum for Industrial Culture), and the DB Museum showing the history of the German railway company Deutsche Bahn covers everything from the time when the first German railway was laid between Nuremberg and Fürth to the latest generation of high-speed ICE trains. Nuremberg’s role in the toy-making industry is documented in the Spielzeugmuseum (Toy Museum), while the permanent exhibition at the Castle allows visitors to look back at Nuremberg’s past as an imperial city.

The darkest chapter in Nuremberg’s history is remembered at the Documentation Centre at the Nazi Party Rally Grounds in the permanent exhibition which deals with the causes, context and consequences of the National Socialist reign of terror. The period which followed is documented in the ‘Memorium Nuremberg Trials’ in Nuremberg’s Palace of Justice – the place where world history was written between November 1945 and October 1946.

The festivals held range from the International Festival for Spiritual Music (ION), and the open air event ‘Rock im Park’ to the Bardentreffen world music festival, which transforms Nuremberg city centre into a colourful venue for musicians from all over the world for a whole weekend – free of charge.

Both the ‘Klassik Open Air’ concerts held in the summer by the Nürnberger Sinfonie Orchestra attract fans of classical music for a picnic at Luitpoldhain park. Concerts, opera, drama and ballet can be found at Staatstheater Nürnberg (Nuremberg State Theatre), the centre of the city’s theatre scene, as well as many smaller venues.

One of the theatre season’s particular highlights is the annual international theatre festival ‘ARENA… of the young Arts’, a six-day event which takes place in Erlangen with a huge variety of performance art, dance and physical theatre. Theater Erlangen has an extremely varied programme every year.

Erlangen is also one of the stages for the annual ‘Fränkischer Sommer’ music festival which involves many of the towns and districts in Middle Franconia. Among the annual highlights in Erlangen are the International Comic Salon, the international figuren.theater.festival and the Poetenfest.

Comödie in Fürth is the place to go in the region if you want to enjoy some comedy.

There’s always something going on in the region, even away from all the large music and theatre festivals. This is because of the numerous large and small clubs, stages and concert venues it offers.

There are many other events in the region that ensure that there is something to see and do throughout the entire year. The Blaue Nacht (Blue Night) in Nuremberg in May is the cultural event of the year, with theatres, museums and other art institutions opening their doors and offering visitors a chance to explore the city’s art and cultural scene.

Also in May and September is Nuremberg’s Trempelmarkt, a popular flea market which is the largest of its kind in Germany. A similar event, the Grafflmarkt, takes place in Fürth in June and while it might not be quite as big, it certainly has just as much atmosphere.

Bergkirchweih, also affectionately known as ‘der Berch’ – the largest beer festival in Franconia and the nicest in Germany according to some – starts in Erlangen on the Thursday before Pentecost. The festival takes place above the cellars where Erlangen’s breweries used to store the beer. Seats under old linden, chestnut and oak trees transform part of the Burgberg hill into the largest beer garden in Europe.

Another event which is just as much a fixed part of Erlangen’s social calendar is the Schlossgartenfest, the University’s garden party, which traditionally takes place on the last Saturday in June. Against the backdrop of the Erlangen Schloss and the orangery, lit up by thousands of lights and accompanied by a spectacular firework display, it is one of the largest and most beautiful garden parties in Europe.

The volume steadily increases over the course of the summer, for example at the Norisring Rennen, the DTM series’ only city track.

In autumn, when the nights grow longer, the focus turns to science in the cities of Nuremberg, Fürth and Erlangen. Once every two years, the Long Night of Sciences gives visitors a chance to go behind the scenes at some of the larger public and private research institutions in the area. The six higher education institutions in the region, companies involved in research and other institutions which work in scientific fields open their labs and lecture theatres to the public. 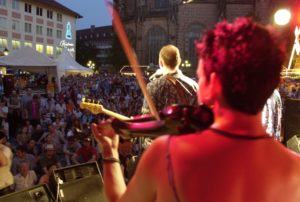 There is plenty to do during your free time in and around Erlangen and Nuremberg. The city centres and the attractive surrounding countryside provide plenty of opportunities to discover new and interesting things, whether its during a stroll through town or a sporting adventure. Fränkische Schweiz, a paradise for climbers and walkers located to the north of Erlangen, is right on FAU’s doorstep and water sports enthusiasts will love the Franconian Lakes to the south of Nuremberg with the University’s water sports centre. All students and doctoral candidates enrolled at the University can enjoy a wide range of cultural events – theatre, opera, concerts, festivals and museums – at a reduced rate. In addition to all of these attractive possibilities, FAU and the cities of Erlangen and Nuremberg offer plenty of opportunities to get involved with culture and sport.

Every semester, FAU University Sports organises a wide range of low-cost sports courses for students in Erlangen and Nuremberg.

Erlangen is a very vibrant student city with lively nightlife. But Nuremberg also has a lot to offer in terms of pubs, beer gardens, cinemas, bars, and restaurants, so that there really is something for everyone.

Students and staff at FAU can join various groups and ensembles. The Akademische Chor (choir), Universitätsorchester Erlangen (symphony orchestra), Big Band, Brass Ensemble and other musical groups practice every week in the Orangery in the Schlossgarten.

Each semester, the adult education centres in Erlangen, Fürth and Nuremberg offer a vast array of courses including language courses, cooking classes, specialised sports classes, etc. Moreover, there are different courses for specific target groups or courses that can prove helpful for your further professional career.

Those who wish to improve their knowledge of German or another language which they are learning are invited to take part in the language tandem programme.

Besides the University, there are many clubs and societies which offer a range of leisure activities.