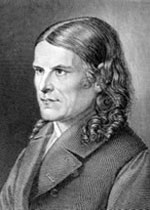 Friedrich Rückert was a linguistic genius and intellectual who expressed his observations and opinions in 44 languages.

He became professor of Oriental languages in Erlangen in 1826, which is said to be his most productive period. During his time at FAU, Rückert published his most famous work ‘Die Weisheit der Brahmanen’ (the wisdom of the Brahmins) which contained stories, proverbs and aphorisms from India. He also contributed to setting the direction for teaching in Oriental studies.

It is thanks to Rückert that the rich heritage of the Orient was explored in such detail over the course of the following century. In this respect, he was as influential as Goethe, Herder and Schlegel.

His talents as a poet also had an influence on church music – Gustav Mahler set music to some of the elegies that Rückert wrote in memory of his two children.
Image: FAU University Library