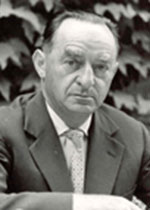 The renowned writer Hermann Kesten studied law at FAU. Before the outbreak of the Second World War he was considered one of the great writers in Berlin, alongside Erich Kästner. However, he was forced to flee Germany due to his Jewish roots. In exile in America, he saved writers and artists from persecution under the National Socialist regime.

He received many awards for his literary work and his efforts to help the oppressed, including the Georg Büchner Prize and the Nelly Sachs Prize. He was also a member of various academic societies and president of the PEN centre in Germany. He was awarded an honorary doctorate by FAU in 1978.