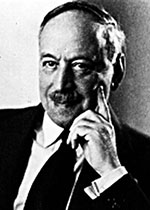 Arthur Eichengrün began his studies in chemistry in his home town of Aachen in 1885 and later completed his doctoral degree at FAU in 1890. Eichengrün, one of the key founders of Bayer AG, held around 50 patents. Many of these were for discoveries he had made by synthesising various chemical substances, but other were for inventions such as Cellon records or the smokeless flash used in photography. To this day, there is ongoing controversial debate as to whether he should be credited with the invention of aspirin (British Medical Journal).

Arthur Eichengrün was persecuted under the National Socialist regime due to his Jewish roots and was deported to the Theresienstadt concentration camp. He was released at the end of the Second World War and died shortly after aged 82.
Image: Ernst Ludwig Ehrlich Studienwerk e.V.