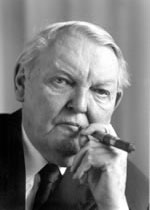 In the early 1930s he encouraged competition and free price formation on the market and despite the predominant political beliefs of the time, he was a great believer in the principle of social market economy, which he is indeed considered to have invented. In 1934 he was one of the founders of the Gesellschaft für Konsumforschung (GfK, Society for Consumer Research), which is one of the largest market research companies today.

Erhard, who was rarely seen without his iconic cigar, is considered the father of the German economic miracle and was one of the most popular politicians in the 1950s.

Photo: We thank the Ludwig Erhard-Stiftung e.V., Bonn for giving us permission to use this photograph.