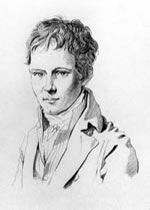 The famous naturalist Alexander von Humboldt attended lectures in chemistry and physics at FAU during his time as Chief Mining Official (Oberbergmeister) of Bayreuth and later became a pioneering geographer.

His many research trips led him as far as America and Asia. After travelling to South America from 1799 to 1804, he was even hailed by some as the second Columbus.

Humboldt is considered to have played a key part in making geography an empirical science and is regarded as the father of scientific disciplines such as climatology, ecology and oceanography.

As a patron of the University, Humboldt supported artists and researchers such as Felix Mendelssohn-Bartholdy and Justus von Liebig.
Image: FAU University Library