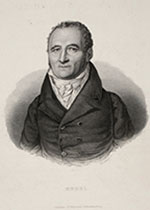 After completing his studies, he initially worked as a lecturer and professor, teaching Hebrew, Greek, Latin and natural sciences at the university of applied sciences in Karlsruhe.

In 1819, he was elected as a member of the regional parliament of Baden and also made a prelate, the highest rank within the Protestant state church of Baden.

In addition to being a lecturer and a member of the clergy, Hebel made a name for himself as a writer with his poetry written in dialect, such as his ‘Alemannische Gedichte für Freunde ländlicher Natur und Sitten’ (Alemanic poems for friends of rural nature and customs), published in 1802. The stories he wrote for various editions of the Rheinländischer Hausfreund calendar are testament to his talent for telling anecdotes and earned him fame which extended beyond the borders of Baden. Johann Peter Hebel is considered to be the most important poet who wrote in the Alemanic dialect.