Why women need a vision 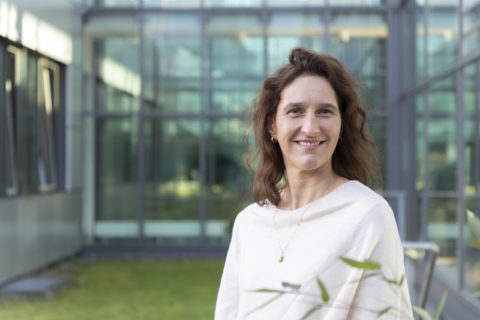 Professor Andrea Büttner has made it: now 50, she’s at the top of the game in science. She is Executive Director of the Fraunhofer Institute for Process Engineering and Packaging (IVV) in Freising and at the same time professor for aroma and smell research at FAU. She sits on numerous committees and has excellent connections with industry and research – as spokesperson, initiator or member of the board of directors of a large number of initiatives, collaborative projects and structures such as the Fraunhofer Lead Market Agriculture and Food Industry, the Fraunhofer Strategic Research Field Bioeconomy, ‘SHIELD – Safe Domestic (Organic) Food through Sensory Detection Processes’, ‘Biogenic Value Creation and Smart Farming’, ‘Campus of the Senses’, ‘C-PlaNeT (Circular Plastics Network for Training)’ or ‘RASPOTA – Safeguarding future production of fish in aquaculture systems with water recirculation’.

It all started with icebreakers on the Baltic Sea

Prof. Dr. Sannakaisa Virtanen is an expert in materials science and engineering, specialising in corrosion and surface technology. Originally from Finland but now settled in Erlangen, she was the FAU women’s representative for 6 years until 2016, and has since actively supported and championed many young female researchers. She comes from a culture where it has been accepted for many years now that it is nothing unusual for women to enter a STEM profession.

It’s not possible to plan your career strategically 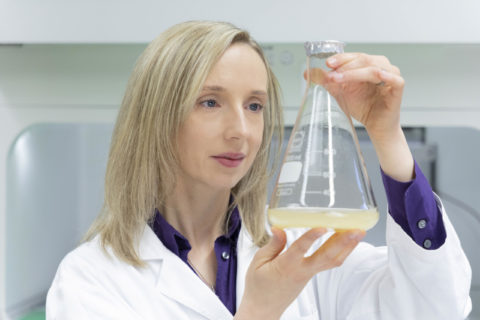 Professor Kathrin Castiglione has held the Chair for Bioprocess Engineering at the Department of Chemical and Biological Engineering (CBI) of FAU since 2018. Her research focuses on applied and sustainable industrial biotechnology. Microorganisms or enzymes are used as biocatalysts in the production of pharmaceuticals, agricultural products or food and fodder. ‘Biotechnology is all around us in our everyday lives. Enzymes are found in detergents and drugs such as insulin are also produced in a biotechnological process – as is beer.’ Professor Castiglione is particularly interested in special molecules that exist as an image and mirror image version and are needed for drug manufacture. 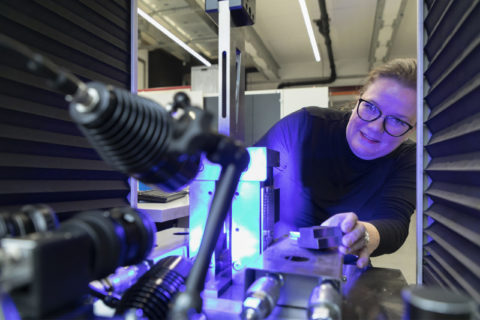 ‘I am the exception to the rule,’ claims Prof. Dr. Marion Merklein, referring to her unusual career path. Unusual because she studied, completed her doctoral degree and finished her postdoctoral thesis without leaving FAU. Just 14 years after she first enrolled at FAU, she was appointed as a professor. The 48 year old specialises in developing light metals for transport technology. Throughout the course of her career, she has often been a pioneer for women, leading the way for others to follow, whether as the the first female professor in engineering at FAU, or the first woman to be appointed Dean of the Faculty of Engineering.

What mineralogy and dentures have in common 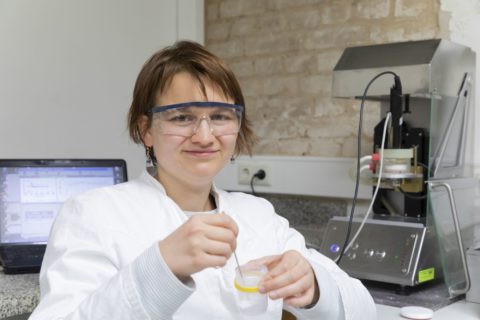 Minerologist Dr. rer. nat. Katrin Hurle, who was born in 1985, comes from a small village near Donauwörth and is the first member of her family to go to university. She was fascinated by minerals even as a child, which is one of the reasons she started a degree in mineralogy (a geoscientific discipline) at FAU in 2005. Today, she works with minerals in medical engineering that are used to benefit patients. Hurle is now a postdoctoral researcher at GeoZentrum Nordbayern where she also teaches and is preparing for her postdoctoral thesis. She has published her research and has received a considerable amount of third party funding. She is also actively involved in several committees at FAU.

My career should also match my political standpoint 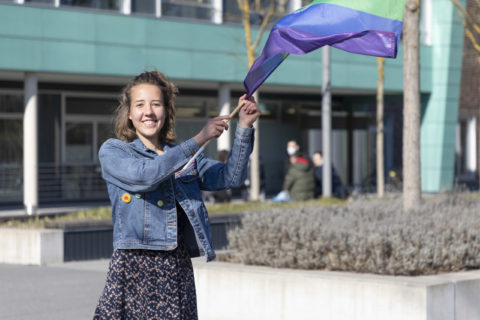 Frederike Jäschke didn’t know Erlangen at all before she came to study here. Born in Dorsten on the edge of the Ruhr area in 1999, she completed a voluntary year of social service in a welfare institution after finishing school. After that, she didn’t want to return to her old hometown but instead get to know another part of Germany. That this turned out to be Erlangen happened rather by coincidence. But not her choice of subject. In 2018, she began her degree in chemical and biological engineering. After two semesters, she switched to chemistry – and is very happy with her decision. Now, at the end of her Bachelor’s degree, an Erasmus semester in Spain is on the agenda.

For me, the human being is the most fascinating machine in the world 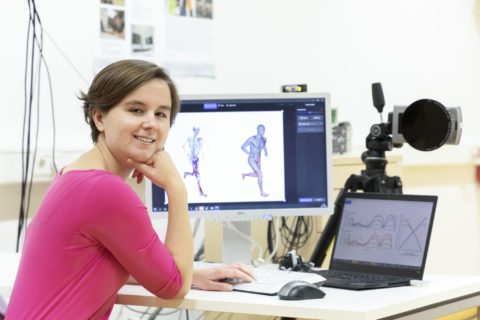 Professor Anne Koelewijn, who was born in the Netherlands, has a Bachelor’s degree in aerospace engineering. She also holds a Master’s degree and a doctoral degree in mechanical engineering. She has been assistant professor at FAU’s Machine Learning and Data Analytics Lab since 2019, when she was just 26. Now 28, she has already conducted research in the Netherlands, the USA, Switzerland and Germany. The fact that she’s considerably younger than her colleagues, but also than many of her students and doctoral candidates, makes her something of an outsider. But she’s accustomed to that.

Studying minerals in an ideal setting at FAU 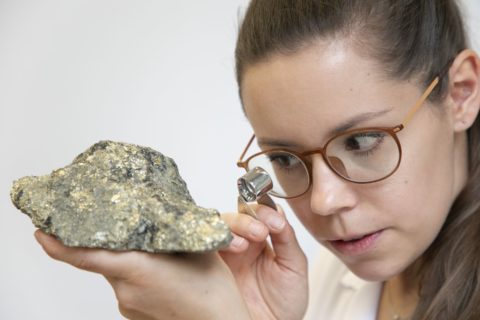 Irina Kirchberger, doctoral candidate, probably has one of the most beautiful workplaces at FAU – right in the grounds of Erlangen Schloss. This is where the GeoZentrum Nordbayern is located. Having studied geosciences – where 50% of graduates were female – she is now conducting research into various types of cement within the Mineralogy Research Group. This is important for construction materials and buildings. Whether she will work in the construction industry some day or else stay in academia is a decision she’s leaving until after her doctoral degree. But one thing is already certain: research is close to her heart.

Women should not shy away from competing at the highest level 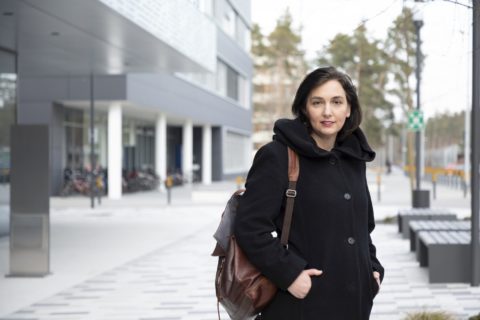 Ana-Sunčana Smith, 46, is professor for theoretical physics at FAU and head of the PULS Group (Physics Underlying Life Sciences). She is also a member of the administrative board of the FAU Competence Unit Engineering of Advanced Materials at FAU and of the research cluster New Materials and Processes. Her research interests include the application of statistical physics concepts to materials science and biophysics. Smith, who was educated and has worked in several countries on different continents, commutes between Germany and Croatia. Apart from her tasks at FAU she is also a senior scientist at the Ruđer Bošković Institute in Zagreb. The researcher and mother of three children is a global citizen – not only because of her professional experience but also because of her French-Croatian roots and her family in Australia (her husband originates from there). Professor Smith speaks five languages, including Russian and German, but in her professional environment she prefers English. 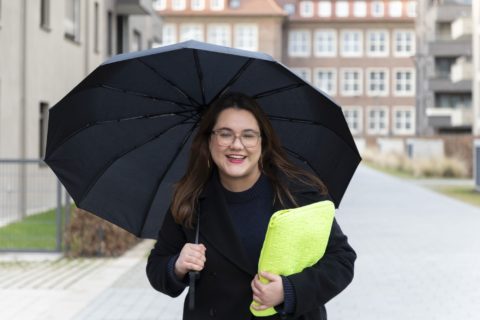 Physicist Yasmine M’hirsi was born and raised in Tunisia. At the age of 15, she moved with her parents to France and finished high school there. For her University studies, she packed her bags again and relocated to the UK where she attained her Bachelor’s and Master’s degrees. In the meantime, she has moved to FAU where she is pursuing a doctoral degree in Theoretical Physics. The pandemic meant that she was not able to move from Tunis, where she and her family are living again, to Erlangen, and had to start doing her research at FAU from a distance. The 24-year-old scientist speaks five languages including Spanish and Japanese. She is eager to learn German as soon as possible. But Germany will not be her last destination. She is planning an international academic career and is willing to relocate anywhere in the world.