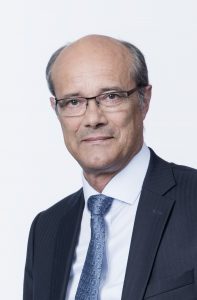 Professor Günter Leugering, born in 1953, studied Mathematics and Theoretical Physics at Goethe University Frankfurt. He was awarded a scholarship for particularly gifted Catholic students from the Cusanuswerk and studied at TU Darmstadt, where he completed his doctoral degree in 1984 and became an assistant professor, completing his postdoctoral qualification (Habilitation) there in 1988. He held a Heisenberg scholarship from 1989 to 1992. Professor Leugering was appointed Chair of Applied Mathematics II at FAU in 2003, after holding positions as assistant professor at Georgetown University in Washington DC, a Fiebiger professorship at the University of Bayreuth(1992–2000), and chair at TU Darmstadt (2000–2003). He has also spent time as a visiting professor at the universities of Nancy 2, Paris 6 and Paris 11, Virginia Polytechnic Institute and State University in Blacksburg, Virginia, and Fudan University in Shanghai.

He has been coordinator of one of the Elite Network of Bavaria’s international doctorate programmes ‘Identification, Optimization and Control with Applications in Modern Technologies’ and the Priority Programme SPP 1253 ‘Optimization with Partial Differential Equations’ of the German Research Foundation. Professor Leugering has also worked in Collaborative Research Centre CRC 603 ‘Model-based analysis and visualization of complex scenes and sensor data’ and Research Group FOR 894 ‘Fundamental flow analysis of the human voice’, and was involved in CRC 814 ‘Additive manufacturing’. Since coming to FAU, he has participated in four projects funded by the Federal Ministry of Education and Research. Professor Leugering is head of the Multiscale Modeling and Simulation group at the Cluster of Excellence ‘Engineering of Advanced Materials’ (EAM) and is a member of the board at EAM. He is a PI in the DFG Transregio 154 ‘Mathematical modelling, simulation and optimisation using the example of gas networks’, in the Priority Programme SPP 1679 ‘Dynamic simulation of interconnected solids processes’ and in the EU training network ConFlex.

Professor Leugering has held positions as Dean of Studies at TU Darmstadt’s Faculty of Mathematics, as an FAU senator, and as speaker of FAU’s Department of Mathematics. He was a founding member and deputy speaker of the Central Institute for Scientific Computing (ZISC) and a member of the board at the Centre for Applied Ethics and Science Communication (ZIEW). Professor Leugering is the editor of a series of publications and is a member of the editorial board of a number of renowned journals. He is also a member of the advisory board at a Max Planck institute and an international research institute.

Professor Leugering has been Vice President since 1 April 2015. His term of office ends on 31 March 2021.

Personal Assistant to the Vice President: