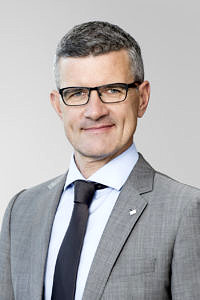 As Vice President People, Professor Paulsen is mainly responsible for attracting and supporting new talent at all levels (including the Graduate Centre), equality, diversity and internationalisation (except for in research) as well as establishing networks with foreign universities.

Prof. Dr. Friedrich Paulsen, born in 1965, studied medicine at Christian-Albrechts-Universität zu Kiel (CAU), where he completed the State Examination. After working as a trainee at the university hospital’s department of oral and maxillofacial surgery and spending time as a physician-in-training at the university hospital’s ENT department, he moved to CAU’s Institute of Anatomy in 1998, where he had completed a doctoral degree in 1997, obtaining a habilitation in anatomy there in 2001. He was appointed as C3 professor of anatomy at Ludwig-Maximilians-Universität München and Martin-Luther-Universität Halle-Wittenberg in 2003. In Halle he founded Weiterbildungszentrum für Klinische Anatomie. After declining an offer of a W3 professorship at Saarland University, he was appointed as W3 professor of anatomy and institute director at FAU in 2010. He has since received and declined further offers from other renowned universities.

Professor Paulsen has received many research awards, including the Dr. Gerhard Mann Sicca Research Prize, the Sicca Research Prize from Berufsverband der Augenärzte Deutschland and the Commemorative Medal of the Comenius University in Bratislava. He has also received teaching prizes from CAU and FAU. Professor Paulsen is an honorary member of the Anatomical Society (Great Britain and Ireland) and the Romanian Anatomical Society. His main areas of research are innate immune defence at the ocular surface and the causes of dry eye syndrome. He has spent time researching abroad in Spain and the United Kingdom. He is an editor of the journal Annals of Anatomy, the renowned Sobotta anatomy atlas and the Sobotta textbook.

Professor Paulsen contributes his expertise to a large number of committees. He is a member of the board and the secretary of Anatomische Gesellschaft, general secretary of the International Federation of Associations of Anatomists (IFAA) and treasurer of the European Federation for Experimental Morphology (EFEM). He is also a member of the expert committee at the Institute for Medical and Pharmaceutical Examination Questions (IMPP) and a member of the expert advisory committee for anatomy of the Bavarian State Chamber of Physicians. He is also involved in various university committees, such as the Elections Committee, the Habilitation Committee, the Commission for Research and Young Researchers, and the Commission for Internationalisation. He is mentor for the Max Weber Programme Bayern (Elite Network of Bavaria/German National Academic Foundation) and the Erasmus+ coordinator for the Faculty of Medicine.

Professor Paulsen has been Vice President since 1 August 2016. His term of office ends on 31 March 2024.