The President of FAU 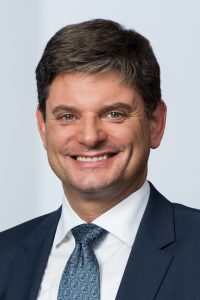 Secretary to the President

Prof. Dr.-Ing. Joachim Hornegger, born in 1967, studied computer science with mathematics at FAU and completed his doctoral degree in 1996 with his thesis on statistical object modelling and recognition.

From 1997 to 1998, Professor Hornegger was a guest researcher at the Massachusetts Institute of Technology (MIT) and the Computer Science Department at Stanford University. After this period abroad, he accepted a position in industry as a development engineer at Siemens Medical Solutions. In 2001, he became the manager for medical imaging in the Angiography and Radiography Systems division and in 2003 he took on overall responsibility for imaging system development.

During his time at Siemens, Professor Hornegger was a guest lecturer at the universities of Erlangen-Nürnberg (1998–1999), Eichstätt-Ingolstadt (2000) and Mannheim (2000–2003). He was offered positions as a professor of electronic engineering at RWTH Aachen in 2004, as a professor of computer science at the Catholic University of Eichstätt-Ingolstadt in 2000, and as a lecturer at Harvard University in 1998 – all of which he declined in favour of FAU. As part of his management training at Siemens, he obtained an additional degree in advanced management from Duke University.

Professor Hornegger became Chair of Pattern Recognition at the Faculty of Engineering and a secondary member of the Faculty of Medicine at FAU in 2005. He was Vice Dean of Computer Science from 2009 to 2011. Professor Hornegger was a Vice President of FAU and part of the Executive Board from 2011 to 2015. In this capacity he was responsible for research and young researchers.

Personal Assistant to the President