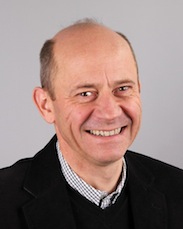 The Officer for Strategic Development, Prof. Steinmann, is responsible for supporting the strategic development of FAU and strengthening its academic position in a national and international context. The focus is on targeted expansion and providing a structure for excellent research at FAU. Prof. Steinmann bridges the gap between researchers and the Executive Board, other official bodies and the committees at FAU in order to make the best possible use of FAU’s potential. The Officer for Strategic Development liaises with the Executive Board, and exercises the powers they assign to him.

After completing his doctoral degree in engineering in 1992, Prof. Dr. Ing. Habil. Paul Steinmann received the Venia Legendi for engineering and became a professor at the university of Kaiserslautern in 1997. In 2007, Prof. Steinmann was appointed Chair of Applied Mechanics at FAU Erlangen-Nürnberg and has been there ever since. He is also the director of the Glasgow Computational Engineering Centre (GCEC) in the UK.

Prof. Steinmann has received a number of awards and prizes for his research, including fellow awards from IACM and EUROMECH (2006), the Timoschenko Visiting Scholar Award of Stanford University (2007), the prestigious ERC Advanced Grant (2011) and the Royal Society Wolfson Research Merit Award (2017). He was an editor of the GAMM Mitteilungen for applied mathematics and mechanics (2005-2016) and is a member of the editorial board of several leading international journals in this area. As well as writing hundreds of often cited specialist articles, he has also published two books and three monographs. His research areas range from material modelling to multi-scale methods, multi-physics problems, non-standard continua, fracture mechanics, biomechanics and more general aspects of finite elements and discretisation methods.

Prof. Steinmann is a reviewer for a number of specialist journals, as well as various national and international research organisations. He has organised numerous conferences, workshops and symposia, including the GAMM Annual meeting and an IUTAM symposium. As well as being a member of several national and international specialist societies, Prof. Steinmann has been involved in the selection panel of the German Research Foundation for research training groups (2001-2007) and in several committees of the German Academic Exchange Service. From August 2021, he will be a member of the DFG selection panel for the Heinz Maier Leibnitz prize. Prof. Steinmann was the deputy speaker of a national and an international DFG research training group and speaker of a DFG research group. He is currently the speaker of the DFG research training group ‘Fracture across scales: integrating mechanics, materials science, mathematics, chemistry, and physics (FRASCAL)’.

He has been the Officer for Strategic Development at FAU since December 2020.