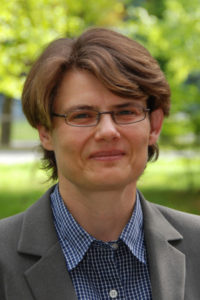 Department of Nephropathology at the Institute of Pathology

Prof. Dr. med. Kerstin Ute Amann was born in 1963 and studied medicine at Ruprecht-Karls-Universität Heidelberg, where she also gained her doctoral degree as well as her habilitation in pathology. She gained a further professional development degree in health administration (Dipl. Oec. med.), where she focused on health economics, business administration and hospital management.

After working as a research assistant, in particular at the Institute of Pathology at the University of Heidelberg, she was appointed senior physician there in 1998. A year later, she was appointed associate professor (C3) and senior physician at the Institute of Pathology at FAU, where her responsibilities included the electron microscope laboratory and her role as subject coordinator for neuropathology from 2001 to 2002. In 2008, she was appointed director of the independent Department of Nephropathology at FAU and Universitätsklinikum Erlangen. In 2010, she accepted an appointment at FAU as professor for nephropathology with an independent department. She has rejected several high-level appointment offers at prestigious universities in favour of FAU.

Prof. Amann is an extremely dedicated scientist whose main research focus areas include changes in cardiovascular structure and function in chronic renal insufficiency, prenatal programming – the influence of environmental and maternal factors on the onset of high blood pressure and kidney damage in later life, and the morphology, pathogenesis and treatment of inflammatory and degenerative kidney diseases. Her dedication is reflected in the numerous awards she has won, an extensive list of publications and activities in teaching, support for young researchers and training. Prof. Amann is a highly regarded editor and reviewer of numerous publications.

Her current term of office ends in September 2023.