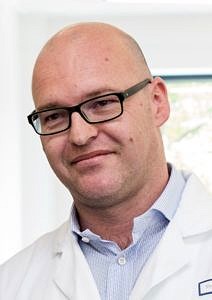 Secretary to the Vice President

Prof. Dr. Georg Schett was born in 1969 and studied medicine at the University of Innsbruck in Austria, where he completed his doctoral degree in 1994. He worked as an assistant at the Research Institute for Biomedical Aging Research at the Austrian Academy of Sciences until 1996. Afterwards he completed his speciality training for internal medicine at the University of Vienna in 2001, before becoming a specialist physician and then a senior physician in 2004. He completed his habilitation in internal medicine in Vienna in 2003. In 2004, he was a visiting researcher at Amgen in Thousand Oaks, California, USA and qualified as a specialist in rheumatology in the same year. In 2006, he accepted an appointment at the Chair of Internal Medicine at FAU and is also director of the Department of Medicine 3.

Prof. Schett has published more than 760 articles in peer-reviewed journals and, as an expert in his field, he has been invited to more than 660 congresses and conferences. His h-index is 122. He has won a large number of prizes and awards, most recently the Dr. Franciscus Blondel Medal of the city of Aachen for outstanding contributions to the field of rheumatology in 2019. He was previously and is currently involved as principal investigator or speaker in eight third-party funded projects including Collaborative Research Centre 1181 (Checkpoints for Resolution of Inflammation) since 2015, the ERC Synergy Grant (4D+ NanoSCOPE), which started in 2018, and the BMBF funding project ‘MASCARA’ (Molecular Assessment of Signatures Characterizing the Remission of Arthritis), which began in 2020.

Prof. Schett’s scientific expertise is in demand all over the world. In 2009, he was a visiting professor at UCSD (San Diego, CA, USA), in 2012 at the University of Xian and University of Guangzhou (China), in 2014 at the Hospital of Special Surgery (NYC, USA) and at NYU (NYC, USA) in 2018. He is a member of the DFG review board, a reviewer for several academic societies and journals and has collaborated on organising a large number of international congresses. Since his appointment at FAU, he has maintained close links with an ever growing number of national and international collaborations on joint projects with institutions such as the VIB in Ghent, Belgium, the Karolinska Institute in Stockholm, Sweden and the Kennedy Institute of Rheumatology in Oxford, UK.